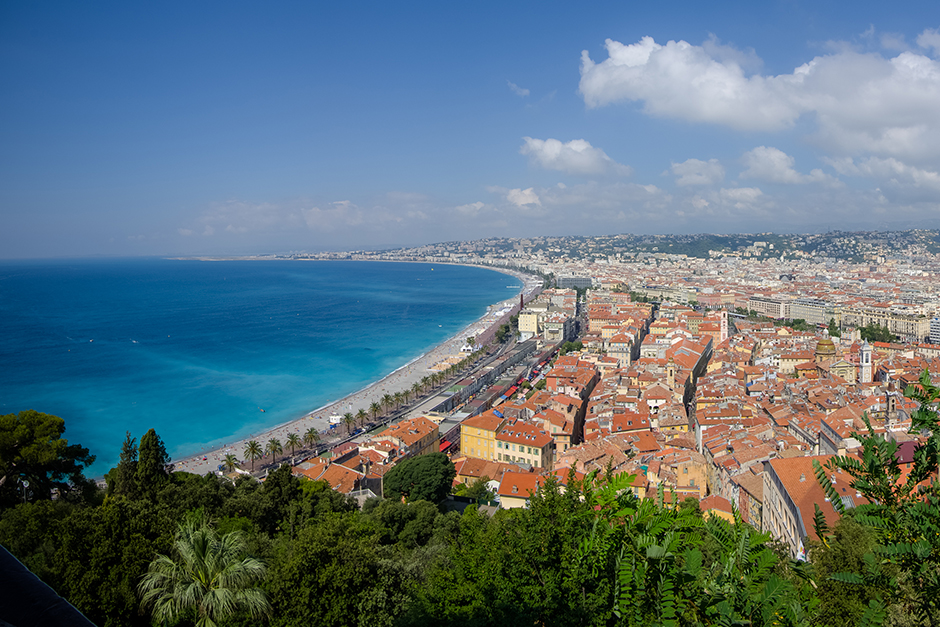 Elegant Nice, where Provence meets Italy has the elegance of the Riviera and the laid-back feel of a Mediterranean resort. Flying into the airport at Nice Cote d’Azur, the sea sparkles on one side, the snow on the peaks of the Alpes Maritime on the other. With sunshine for approximately 300 days a year and the mountains to protect the city and coastline from the wind, you can see why when the Romans stopped off in Nice, they didn’t bother going home for a long time.

It’s that kind of place, a bit of a party city, with a relatively young population: 50 per cent aged below 40. There are concerts and festivals almost every week, many of them outdoors, notably Carnival from 18 February to March 8 and open air jazz concerts in the gardens and amphitheatres of Cimiez in July. Painters including Monet, Renoir, Picasso and Dufy came here for the quality of the light and the rich Provencal colours.

Restaurants, museums and cafes are packed into a relatively small part of the city, much of it in the baroque Vieux Nice (Old City) and the elegant Promenade des Anglais which stretches from the airport to Vieux Nice along much of the city’s 10km coastline. Nice is also the stepping stone to ancient hillside villages and fortresses, Monaco, the rest of the Cote d’Azur and Provence.

Make a quiet start at a cafe in one of the backstreets of Old Nice in the Place du Rossetti where you can plan your day with a coffee and a socca, a thin, crispy pancake made from chickpea flour. Nice is full of old churches – peep into the Cathedrale Ste-Reparate and Eglise du Jesus, both dating back to the early 17th century, or the Russian Orthodox Cathedral, just behind the Promenade Des Anglais, a reminder that Nice was the haunt of the Russian aristocracy. Stroll along the Promenade with its grand hotels and palm trees and check out the lavish Hotel Negresso, Nice’s smartest hotel where Gustave Eifffel designed the glazed verriere over the salon.

Cimiez, a smart residential district with stucco facades, plenty of greenery and winding avenues is a must for art lovers. Musee National Marc Chagall is a low, contemporary building, designed in consultation with the artist. The Musee Matisse includes Fauve portraits, bronze works and drawings, as well as showing the influence of the Riviera sunlight and North Africa and Tahiti on the artist. Nearby in the Musee Archeologique lie the Roman remains of the city of Cemeleum, where the Jazz festival takes place outside every July.

Promenade des Arts, running from the Old to the New Town, is one huge open-air museum, or actually a 9 km tramway of arts and modern architecture, including the theatre and the Musee d’Art Moderne et Contemporain (Mamac). Don’t miss the Friday night tram (7pm) for a 2 ½ hour guided tour along Line A of the Nice-Côte d’Azur tramway.

In search of green space? Head for the Botanical Gardens on the Corniche Fleurie, Park Phoneix at the western end of the Promenade des Anglais for glasshouses, gardens, tropical birds and playgrounds, or up to Parc de La Colline du Chateau from the Place Garibaldi.

Out of town, the Nicois go to the bright, pretty harbour of Villefranche-Sur-mer to eat, drink and chill out. Fishing boats still sell their catch in the harbour, although it has become a popular stop for cruise ships. Place Amelie Pollonais has a flea market on Sundays, a crafts market on Mondays and is a good place to eat, as is Qaui Courbet, renowned for its fish restaurants. Eze is a picturesque windy village on the way to Monaco, a popular stopping point above the cornice while perfumelovers should explore the Musee International de La Parfumere up in the hills in Grasse . Vence and St Paul de Vence, home to painters including Matisse, have lovely narrow streets and medieval squares: the best time is in the evening when the coach trips have left. A day in Monaco will be memorable: small enough to be manageable, but interesting and sophisticated too. Explore the Palace or watch the changing of the guard at 11.57 am each day, enjoy lunch in one of the many cafes or restaurants in the narrow streets near the Palace, visit the casino after 2pm and relax afterwards in the tranquil gardens of the Theatre du Fort-Antoine with a good view of the yachts in the harbour. Musee Oceanographique et Aquarium is brilliant downstairs: if the coral reefs full of exquisitely coloured Mediterranean and tropical fish aren’t enough, there’s a shark pit too.

Nice has its own gastronomy, a rare honour for a French city. Specialities include salade niçoise, raw vegetables with olive oil, hardboiled egg and anchovy fillets, panbagnat, which is Salade niçoise between two halves of bread rubbed with garlic and soaked in olive oil, pissaladière, onion tart with olives and anchovies, ratatouille, farcis (stuffed vegetables), tomatoes, courgettes, bell peppers and locally grown olives. The choice of seafood restaurant is vast, but for a more traditional Gallic atmosphere, head to Le bistrot d’Antoine, 27, rue de la Préfecture, a cheap and cheerful bistro in the cafe on the ground floor. Upstairs is quieter and more romantic. Au Petit Gari 2 Place Garibaldi opposite the lively Place Garibaldi is known for its Provençal cuisine. Chef Eric serves freshly baked bread and traditional dishes.

It’s well worth going to Villefranche for an evening out.

At night time, music comes to Nice. Linger at La Bodeguita del Havana 14, rue Chauvain for nightlife, salsa music and South American cuisine or Shapko 5 rue Rossetti for jazz. Villefranche is perfect for sitting in a cafe to watch the world go by – Bar Cosmo or Les Palmiers on the Amelie Pollonnais Square. For night clubs, head to Cannes for Le Loft, 13 rue du Rd Monod and Antibes for La Siesta Route du Bord de Mer. As you might expect in a jet set haven, there is a casino in Nice and Cannes but the ultimate casino to spend the evening in is in Monte Carlo.

Go to the open air market in Cours Saleya in the Old town for flowers and local specialities, every morning except Monday, and the Alziari Boutique for the best olive oil. Find fascinating bric a brac in the flea market in Cours Saleya every Monday. Designer labels are concentrated in the New Town along avenue de Verdun, avenue de Suède, rues Masséna, Alphonse Karr, de la Liberté. Rue de France and ruse Massena have more mainstream stores. L’Art Gourmand 21 rue du Marché is a chochoholic’s heaven with a mouthwatering display of home -made chocolates, marzipan, hazelnuts biscuits, nougat and candied fruits and a tea house upstairs.

With 7.5km of beaches in Nice alone, you can wander from the Promenade onto a stretch of sand almost anywhere, although some beaches are private. Beau Rivage, belonging to the elegant Vieux Nice hotel is one of many private beaches where in return for your euros, you can enjoy a sun-lounger, parasols and changing facilities. Blue Beach in front of Hotel West End is a childfriendly beach by day and night spot after dusk. The Neptune opposite the Negresco has pedalloes and a playground. A little further away is Cap d’Antibes, edging into the sea between Antibes and Juan les-Pins, the ultimate for spotting celebrities and jet-set, and further west still, but nevertheless worth a visit, is St Tropez which has kept its charm and beautiful beaches in pristine condition.

Inside Management – Enter the business coach