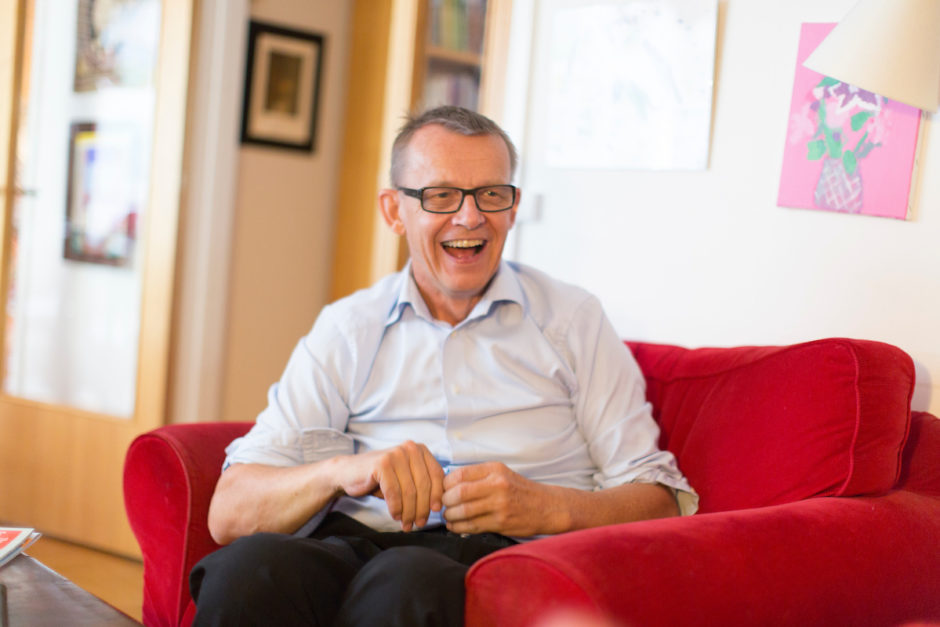 Early on September 11, 2013, Hans Rosling called me to ask if we could do our interview at his home in Uppsala. Hans had been lecturing late the night before in Stockholm to students at Stockholm university on the environment and wanted to spend the day at home. I didn’t realise how important home was to him until we arrived.

The Roslings lived in a modest radhus (terraced house) development, one of many found all over Sweden. Hans opened the door to the photographer and me, and his wife, Agneta, a psychiatrist, offered us coffee and pepparkakor.

The hallway was crammed full of books, a grandson’s paintings drying on the dining room table. Apart from a few African carvings, there was little evidence of his extraordinary global career as so many things – statistician, TED and t.v. presenter, edutainer, challenger of orthodoxy and complacency, professor of public health, doctor.

Until he opened up his laptop to back up a point he was making with statistics, he did not mention Gapminder, the online free statistical site that his son Ola and daughter-in-law Anna persuaded him to set up with them. Google now owns the source code behind Gapminder’s Trendalyzer for the software, for which it paid the Gapminder foundation, a charitable organisation, an undisclosed sum.

In fact, the house where Hans lived with Agneta is very close to the tile factory where his paternal grandfather worked and the tiny hamlet where his father grew up. Hans and Agneta were at the same school but sat in the classrooms next to each other.

“And then from the age of 13, we were always in the same classroom, and when we left school, we lived together ever since,” he added.

I pointed out that he travelled around the world and yet he lived just 200 metres from where he was born, and always came back to the same place. Was it important to have this to come back to? “Yes,” he replied. “Life is at it is. Nothing was planned, it was just serendipity. I did not have a plan that I was going to do all this. It just happened, and luckily I am still living here.”

After leaving school, Hans qualified as a doctor, Agneta a midwife. In 1972 they went to Asia for six months, backpacking and studying in Bangalore alongside students on a public health programme, in factories and remote areas. They then trekked in Nepal before working at the university hospital in Bangkok and then Indonesia. This, said Agneta, was the turning point for Hans.

He realised that the traditional way of looking at the world in terms of East-West and developed-underdeveloped just weren’t appropriate. He also realised that “the West” – a phrase he challenged me to define – would not dominate the world much longer. It kindled what he described as “an obsession with public health” and his curiosity in how the rest of the world lived. His view of the world rested on the understanding that people everywhere are just like you and me.

“Just last night, I asked 200 students studying global environmental issues, “How many of the world population do you think would like to use washing machines for their bed sheets and their jeans?” And, you know, they never thought, that this was the question. They would like to fight poverty, they would like to do these nice things, and children shouldn’t die, but they don’t know the goal is the washing machine, for everyone. They haven’t seriously thought about equal situations for people in the world.”

“Now, Indonesians and the Kenyans and the Pakistanis want these nice homes and life and some transport, and to go to the beach every now and then, you know? Now, what the richest people want to do, that’s more difficult to know.”

He believed it was more difficult to calculate the effect of demographic and wealth changes in richer societies than it is in economies that are growing rapidly from a lower start. “We go from the service society to the creative society, to experiences.”

“It’s hell to be an investor in the post-industrial societies. It’s difficult to know where growth will come and where it will not come, and how it will be shaped, whereas in the rest of the world, it’s quite straightforward. So the money will move.”

Although much of his work focused on public health, including his discovery of the parasite that caused Konzo fever, or tired leg syndrome, in the Congo, it was the challenge of climate change that he returned to repeatedly throughout our conversation. “The problem is that when Britain burns coal, the problem arises in Bangladesh. When Russia burns coal, the problem arises in China,“ he said. Global governance on climate change was the only way forward, in his view.

Hans stopped practicing as a medical doctor on Midsummer Eve, 1983, when he inserted a pacemaker for the last time. I asked him how he had dealt with some of the suffering he had seen over the years, particularly in parts of India and Africa. He replied that he saw the problems of human beings as part of the world, like a pathologist dealing with death. “Greed causes me much more suffering than extreme poverty, because when I see extreme poverty, I feel like this: “Let’s get something done, yes?” He did however say that when he saw conspicuous consumption, as a social democrat he immediately saw an opportunity to raise tax revenue for social services.

Did he believe in God? No, he said, not for the last three decades, not after performing five grim operations to save the lives of women with stillborn babies.

Yet, ever the optimistic, he added, “I almost wonder why you don’t ask, how do you feel about not doing something important? Eradicating extreme poverty is not about emotions. It’s a human and professional urgent task. People are living in poverty, but we could end that in fifteen years, if we were just reasonably clever.”

After almost four hours, Agneta reminded him gently that if they didn’t leave soon, they would the chance to eat lunch at the nearby school. I’d been trying to wind things up for at least an hour because he was looking tired, but it was impossible to stop him talking on any occasion. But he clearly listened to Agneta. As they cycled off together, the world-famous professor and his eminent wife looked one of the most contented couples in the world. I have thought of that image so many times since hearing Hans had died.