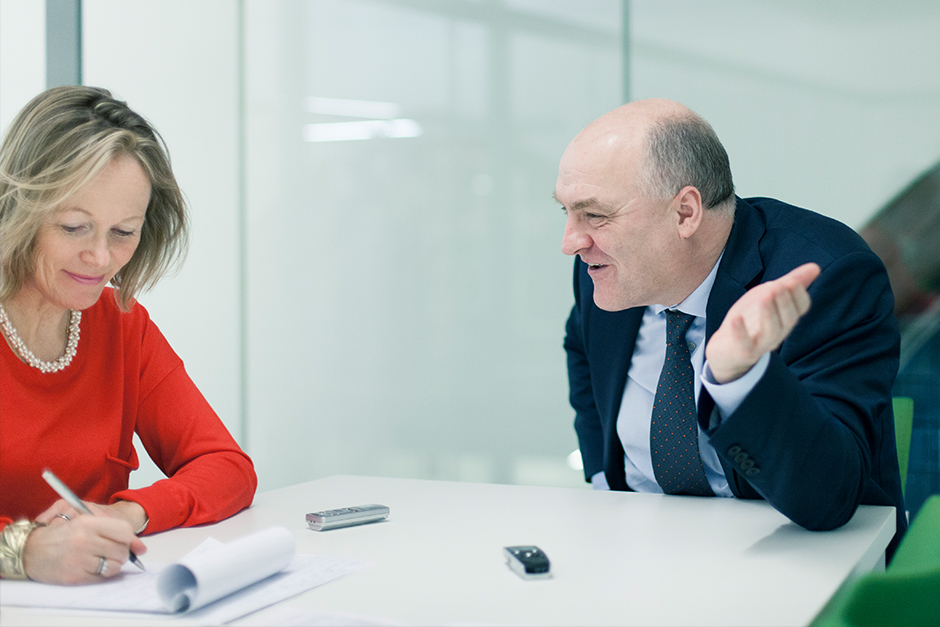 HF: One of Scottish Mortgage’s largest holdings is in Illumina, the next-generation gene sequencing company. Is this because of the appreciation in its share price, or because you want it to be the largest holding?

JA: Tom (Slater, co-manager) and I are very excited because we think that the wave of exponential technological change that we’ve talked about in Trust before is broadening out into areas such as genetics, and this is much more important to humanity. Our holding in Illumina has increased partly because the share price has gone up so much, and partly because when we first bought the shares in 2011 there was a chance for genomics to become more significant in medicine, and for Illumina to become the most important company in this field.

HF: But as the share price appreciates, do you have to reconsider the size of the holding?

JA: In my view, the increase in the share price underplays the increasing appeal of the company. It looks – although these things are very difficult to get absolutely right – as if about 90 per cent of the machines used in gene sequencing anywhere in the world are likely to be Illumina machines, and these are becoming industry standard. That’s a pretty remarkable level of dominance.

From the people we’ve spoken to at the University of Edinburgh and elsewhere, it seems that thanks to research and innovation, everybody will be sequenced at birth in the foreseeable future. Everybody. Obviously what happens to the scale of the market when that happens will be truly remarkable. Sequencing is the foundation for much of the technological developments in genetics and medicine.

HF: I understand the potential but surely cost comes into it too? Doesn’t it depend on this technology being affordable?

JA: You’re absolutely right. The systemic issues are much more complicated than in some other areas; I think that, up to now, the costs have delayed this potential development, so that it hasn’t happened yet. The principal reason we now have the 100,000 Genomes Project in the UK is that it will be much cheaper. [The project aims to sequence 100,000 whole genomes from NHS patients by 2017.] If you are able to catch nasty things such as medical conditions before they happen, then this is much cheaper than dealing with the consequences of them once they occur. I think this is really powerful, because it’s not just about clinically improving treatment but is also a way of cutting costs within a healthcare system by, for example, allowing you to prescribe specific drugs for particular patients because you will be able to predict the probable outcome.

The depressing thing is that most of the discoveries are actually happening in the US. Despite the fact that the healthcare system is so badly messed up there, we can’t find nearly as much innovation elsewhere. Why is it not happening in Europe, Japan or Asia? Developments in technology have created incredibly exciting opportunities, not only in genetics but also other areas such as energy and transportation, and we think these are more interesting than we perhaps felt two or three years ago.

HF: Do you mean in areas such as alternative energy?

JA: Yes, a year or two ago when we were looking at electric sports car manufacturer Tesla for the first time, we went round most of the big car companies elsewhere in the world and asked, “What’s your reaction to this?” With the sole exception of BMW, they said, “Nah, how can a small company take us on? How can you believe that electric is going to work?” Now the reaction is completely different and they are all acknowledging that this is the future.

You know, I think that 10 years out, we probably won’t be driving cars because they will be driving themselves. The technology is pretty much there now. You’ll plug them in, in the way you power your home, you’ll power your car, it will be self-drive, you’ll have solar in your home, solar to power your car.

HF: I can see that factors such as pollution and lower speed limits in cities are working in favour of electric cars. Councils love them.

HF: Before the interview, I was looking at Scottish Mortgage’s performance figures. Over the last 10 years the trust has become a global trust rather than one with half its assets in the UK. Despite its impressive performance record, some argue that this would make the trust more vulnerable to a global downturn. How do you see it?

JA: There is a misconception that riskiness is being away from the index. I would argue that it is unquestioningly investing in the index that is in fact dangerous, because of the risk of companies with new business models superseding the traditional businesses that tend to be large constituents in the index. If we look at the healthcare, transport and utility industries, the ability of many traditional companies in these sectors to move on in future is very constrained.

It’s not at all clear that the innovations in healthcare are good for traditional pharmaceutical companies, while in the financial sector the whole system is ripe for disruption. In China, it has probably happened already with companies such as Alibaba and Tencent disrupting established financial models. In the US, Scottish Mortgage has invested in Lending Club, which brings together capital providers and borrowers to provide lending facilities to small and medium-sized entities. We’ve all seen the peril in that old cliché: “Even in a recession people have to eat, so you buy shares in supermarkets.” Well, look what’s happened to Tesco! I think this reflects the extent to which the process of change has happened in the areas we’ve mentioned, and adds to the worry, in my view, about the more traditional incumbents in the index.

This is a relatively new method for sequencing genomes at high speed and low cost. The development of gene sequencing in 2003 provided scientists with the ability to extract genetic information from biological systems, but its effectiveness was limited by time, scale and cost. However, the introduction of next-generation and other technologies has enabled researchers to sequence DNA much more quickly and, crucially, cheaply. Last year Illumina announced the introduction of a new machine that could sequence the genetic code of a human cell for as little as $1,000; less than a decade ago, the cost of decoding a human genome was $250,000.

Researchers can use next-generation DNA sequencing technologies to address an increasingly diverse range of biological problems. It’s also big business: by 2020, the global next-generation sequencing market is estimated to be worth $8.7bn.