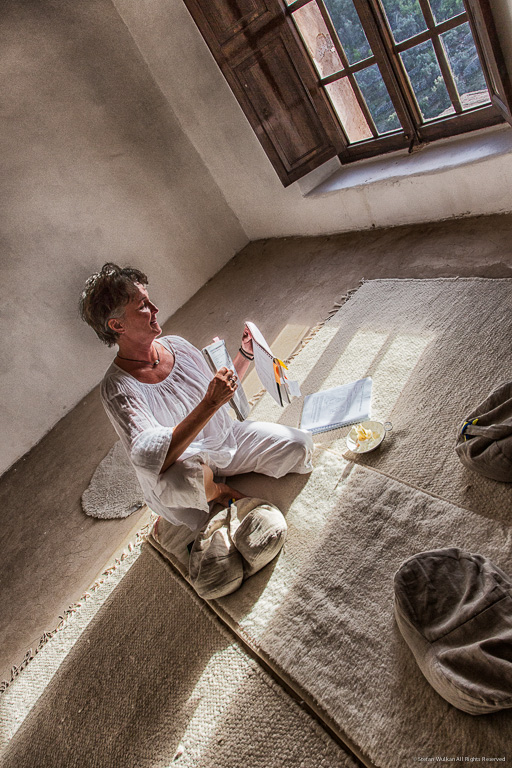 I was searching for some TLC for my soul after having to have brain surgery earlier in the year. When I heard about a yoga retreat in an old monastery, up in the olive groves above the sea on Mallorca’s rocky north-western corner, it was an easy decision to book and go.

I landed in Palma early in September at the end of a Mediterranean thunderstorm, the first rain on the island for months. I took a taxi from the airport to a cafe in Valdemossa, the small town to where the writer Georges Sands retreated with her ailing lover Frederick Chopin, to improve his health – Valdemossa is pretty, but it didn’t work and it rained for most of the winter they were there.

In a café in Valdemossa’s tree-lined market place, I met Gunilla Tähti Wigge, the yoga teacher from Stockholm who had organised the retreat. She had warned me that no airport taxi driver would drive me up to the house, and as we turned off the coastal road to Deia and bumped over the potholes on the narrow dirt track, making our way slowly through olive trees, goats and bushes, I realised why.

Son Rullan was originally a monastery, built in the 13th century. About 500 feet up into the mountains, surrounded by hundred-year-old trees, the views from its stone terraces are spectacular, both down towards the sea and up towards the jagged peaks of the Sierra Tramantuna.

In its early years, Son Rullan was the home for the Knights Templar, whose cross is engraved in the stone walls inside and outside the house. The old hall and kitchen – an open fireplace set into a large chimney – is still intact, although not often used.

Although the house has been modernised and restored, it has been kept as much as it was as possible – cool, simple and peaceful. High above the road, it is quiet save for the rustle of the trees in the wind, the sounds from the animals who graze on the mountain and the birdsong at sunset and sunrise. It is owned by Sybilla Sorondo, a fashion designer from Madrid.

After a brief introduction on the first evening, we sat upstairs in the small studio and did some gentle stretches and breathing exercises. That night I woke to the sound of goat bells. Throwing open my shutters, I saw as many as fifty or sixty goats running down the lane under the window. Every night they would emigrate down the mountain to find warmer pastures nearer sea level and early each morning as the sun rose, they would run up it again.

Our days had a calm but deliberate routine – up early at 5.45 am for an early meditation and yoga session before breakfast at 8.00 am. Then, time to ourselves or a drive to a market or perhaps the steep walk down to Foradada, the secluded beach with a huge hole in the rock nearby. We’d have a light lunch of fruit, cheese, salad and bread. After the first two days of torrential rain, baking heat followed and most of us would while away the afternoon in a hammock or on a sun-lounger.

In the early evening, there was a class – sometimes yoga, sometimes Pilates or Nia, movements based on martial arts and relaxation techniques, invariably set to Latino music, taught by Åsa Georgii, who teaches Nia in Stockholm.

Afterwards, we’d have a quick swim to cool down before supper, a simple, but warming and hearty meal, and sometimes a short and quiet evening meditation before bed. There was wine, but I found I lost the taste for it after a couple of days, as did most of us.

Gunilla teaches Kundalini yoga, which uses breathing techniques, relaxation and meditation to help create inner peace and is known as ‘The Mother of all Yogas’. The emphasis is on the breath and mind, and is very gentle, using chanting and singing very often. It fitted into the heat and everyone could do the exercises regardless of age or injuries.

Controlling the mind was another matter. I would inwardly question why we had to get up in the dark to meditate at 5.45 a.m. As I sat on the yoga mat cross-legged, my hips would hurt and my mind would wander. I’d count the minutes till the break between the first session and the second, when the cooks would have prepared fresh smoothies, and dream of breakfast.

But my mood would change as the sun came up and afterwards, I would feel calm and refreshed.

After three days, I woke up with bad ear-ache. When David Cornadorgros, the mountain guide arrived early that morning to take the others across the mountains and for a swim and picnic at a secret cove, I was determined to go. One look at Gunilla and I knew I wasn’t going. So it was off to the doctor who quickly disarmed me, dispensing warmth and concern free of charge and prescribing rest and antibiotics. Afterwards, I wandered over to one of the little cafes nestled on the side of the main street and sipped espresso in the sunshine.

Sitting alone outside by the pool that afternoon, I felt sorry for myself. My ear hurt and I had been disappointed to miss the hike. But later, in the garden, I began to feel differently. I realised that I had been trying to prove that I hadn’t been ill, but my body was trying to tell me that it had to heal. The message was clear: I had to listen. This isn’t exactly rocket science, but sometimes you have to step away to see things clearly.

From then on, it was easy. I began to accept things. I wrote down things that helped me, breathing exercises, mantras, thoughts, things that people had said. I was lent a book about mindfulness (Mindfulness: A practical guide to finding peace in a frantic world by Mark Williams and Danny Penman) and I became more aware of my thoughts and how to control them.

I studied a little book Gunilla had written for all the guests, with meditation guides and simple exercises and relaxation techniques. I stopped feeling tired, started wanting to go to bed even earlier, slept better, stopped feeling like drinking the wine available at dinner. I stopped feeling that I needed to do something all the time, slept in some mornings and lay and read by the pool and finally, completely relaxed.

Over the days, our group of nine women also became closer. There were no cliques, no exclusive friendships. Everyone could be as convivial and as solitary as they wished. Some shared problems, some didn’t. There were no expectations. I think perhaps the absence of men removed a potentially competitive element.

On the last morning, we stood outside in a circle and did a simple walking meditation to Tibetan music. A buzzard circled above us and the birds were singing as the sun rose above the house. Everyone seemed a little sad. It was as if we’d been on a journey together, which we had – in our minds. I tried to remember the magic of that early morning so I could take it home and keep it. Sometimes I find it in the back of my mind and remember how I felt.

This article was written for Healthy magazine